You're using an older browser that we are unable to fully support. Your experience with our site may be less than optimal due to our focus on performance, security and reliability. Consider upgrading your browser if you have problems using our site. Learn More
A 4% Discount is applied when using Bill Payment, Cheque, Bank Wire, Bitcoin, Money Order, and Interac Online off the Credit Card price. The discount is already reflected in the volume pricing listed below.
The full list price is required with Credit Card or PayPal. Consider an alternate payment method to your left to qualify for the 4% discounted pricing.
Description

As the one of the most easily identifiable bullion coins available today, Adolph A. Weinman's iconic walking liberty design has endured through the decades. Due to this recognizably and silver content, many investors seek the American Eagle as a premier addition to their holdings. To mark the 20th anniversary of the United States Mint, PCGS has preserved and encapsulated a select group of coins and designated them as MS-69 or near-perfect coins. For 2006, only 151,145 American Eagle coins were designated as first strike offerings for the bullion market. This investment grade, 999 silver, will maintain its near-perfect, mint state, as it is contained in an impact-proof plastic slab. The design on the coin's obverse was taken from the "Walking Liberty" design by Adolph A. Weinman, which initially had been used on the Walking Liberty Half Dollar coin of the United States from 1916 to 1947. This bold design had been a public favorite, and indeed one of the most beloved designs of any United States coinage of modern times, silver or otherwise. The design was revived for the Silver Eagle decades later. The obverse is inscribed with the year of minting or issuance, the word LIBERTY, and the phrase IN GOD WE TRUST. The reverse was designed by John Mercanti and portrays a heraldic eagle behind a shield; the Eagle grasps an olive branch in its right talon and arrows in its left talon, echoing the Great Seal of the United States; above the Eagle are thirteen five-pointed stars representing the Thirteen Colonies. The reverse is inscribed with the phrases the UNITED STATES OF AMERICA, 1 OZ FINE SILVER ONE DOLLAR, and E PLURIBUS UNUM, as well as the mint-mark, if applicable. First strike Coins maintain popularity among investors and collectors alike, given that they were received within 30 days of their mint date. The beauty, extensive history, and silver content are all preserved and available to you at the lowest price! Diversify your holdings with the addition of a 1 oz 2006 American Eagle First Strike MS-69 Silver Coin today! 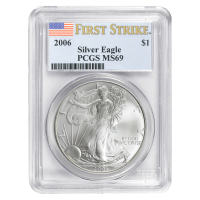 Get notified when market hits your target price!

Get Product and Sales Updates